Honda Jet and CPI Take To The Sky. 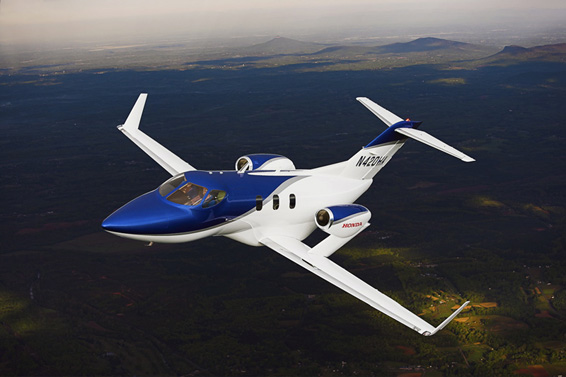 As if Honda of Japan didn’t have its fingers in enough pies, it seems that it is finally poised to take on the aviation industry. Long a dream of founder Soichiro Honda, Honda Jet’s development began several years before his death in 1991 and has only just now received FAA final approval for production of its first business jet, the Honda HA-420. The plane was entirely designed and built in its US based facility in Greensboro, North Carolina, and is expected to enjoy robust sales in the North American market.

Despite a soft post 2008 market for business jets, and numerous delays in production since an initial target in 2007, Honda has finally delivered a unique market proposition that targets a high end customer with luxury and style, but at an entry level price for similar offerings. For a mere $4.5 million, you can have one of the most unique, stylized personal business jets ever built, able to fly almost 500 mph and seat 7.  Honda claims its plane is lighter, faster and more fuel-efficient than competitors that include brand names like Cessna and Embraer of Brazil.

The Honda HA-420 is a work of art inside and out. Designed and evangelized by Honda engineer Michimasa Fujino (now Honda Aircraft Co.’s CEO), the jet offers unique style and innovation. The two GE engines made specially for the jet each offer 2000 lbs of thrust and are positioned above the wings instead of below them. The porpoise-like nose design is said to have been inspired by a Salvadore Ferragamo high-heel shoe. The high tech plane is expected to appeal to the entrepreneur who sees the jet as an expression of innovation, accomplishment, and unique personal style.

We haven’t seen any of these bad boys here at the jet center just yet, but we’re pretty sure with all the new jets landing here lately, we’ll get a first hand look soon.

This blog was originally posted at https://www.cpi-nj.com/blog/honda-jet-and-cpi-take-to-the-sky/