The B-29 Superfortress Tour is Coming to Monmouth Executive Airport 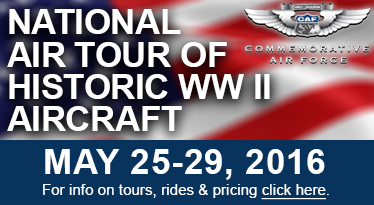 Relive history and even ride on one of the rarest World War II bombers in existence!

This May 25-29th, the Commemorative Air Force (CAF) AirPower History Tour is bringing an unprecedented collection of World War II aircraft to Monmouth Executive Airport. FIFI, the queen of the fleet and the world’s only flying B-29 Superfortress, will also be accompanied by a C-45 Expeditor.

You won’t miss this “once-in-a-lifetime” experience! Visitors will experience the sights, sounds and smells of World War II aviation history-complete with the opportunity to view the airplanes and purchase rides in attending aircraft.

The Boeing B-29 Superfortress, first flown in 1942, began active service in 1944 and is best known as the aircraft whose missions over Japan helped bring about the end of World War II. It was designed as a replacement for the older B-17s and B-24s, with longer range and greater bomb loads. The B-29 was also used in the Korean War in the early 1950s and was a staple of the U.S. Air Force until the late 1950s.

Enjoy a trip back in time while honoring the sacrifices of countless men and women who fought and died for our freedoms. It is a definite must for your bucket list!

Book your seat online and SAVE . . . Seats sell fast and are often sold out by the time they reach a tour stop.

Price includes free B-29 cockpit tour when the aircraft is available. Attending aircraft subject to change due to whether or maintenance.