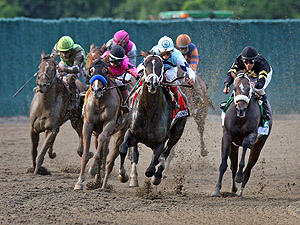 Pilots around the country are preparing to descend on Monmouth Airport to witness the Haskell Invitational at Monmouth Park Racetrack on July 27th.

The Haskell Invitational (G1) is a 1 1/8 mile race for 3-year-olds created in 1968 to honor former Monmouth Park President and Chairman Amory L. Haskell. Originally open to older horses, in 1981 it was changed to an Invitational for 3-year-olds. The race often serves as a prep for the Travers Stakes at Saratoga Racecourse and is a regular stop on the horse racing circuit for the horse racing cognoscenti. With its 1 million dollar purse, it usually attracts the best and the brightest thoroughbreds.

This year Kentucky Oats winner “Untapable” will be the one to beat. Early odds makers have her going off as the 9-5 favorite over the distance. Woody Stephens Stakes winner Bayern, trained by Bob Baffert, is the 3-1 second choice.

Only a short ride to the track, Monmouth Airport is the most common landing for enthusiasts flying in from around the country. The airport is under new ownership and the Monmouth Jet Center (FBO) is now open 24/7 to accommodate any and all arrivals/departures. Both Hangar and tie down space are available for Race Weekend.