I don’t know about you but over here at the Monmouth Jet Center FBO, we have some pretty heated discussions…about crab cakes.

With our proximity to the Jersey Shore and the rich fishing and crabbing that is available, you can’t help but have some opinions. I mean almost every local restaurant has their version of this Jersey Shore staple including the local Runway 34 Restaurant.  Their version is more a crab meat stuffed Portobella Mushroom described as “Jumbo lump crab meat with herbs and cream topped with wilted spinach, roasted red pepper and a shallot and garlic beurre blanc sauce”.  Not a traditional crab cake for sure, but trust us: nobody misses the breadcrumbs after downing this mouth watering appy. 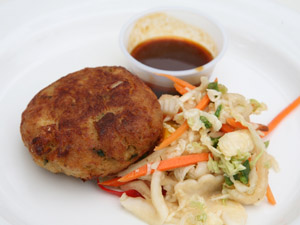 Opinions at the FBO vary.  “I like some spice in my crabcakes, and not all full of breadcrumbs!” says Ruthie Stoakes, FBO manager at the Monmouth Jet Center.  “And definitely Mayonnaise, not Tarter sauce!”. Rich C. on the other hand remembers a fried crab cake deep with flavors of honey, dijon mustard and chives, that keeps him awake on summer nights.  The final opinion is offered by resident chopper pilot and sales manager David C. who chimes in that he doesn’t like the taste of Crab…

Doesn’t like Crab? Dude, too much engine grease affecting the taste buds?  Yikes!

Well, whatever your crab cake religion, you’ll have a chance to worship at the alter of claw meat during the upcoming Crab Cake Cookoff at Monmouth Park, Saturday August 16th from 12 to 5 pm. This annual Shore event attracts a wide range of folks, many of whom fly in for the day for an afternoon of good eats, and music. Chefs from all around the Jersey Shore compete for the coveted “best crab cake” award and the coveted People’s Choice Award in the Cook-Off. You also get to taste fare from many many local restaurants. Crab cakes, fried catfish, and lobster rolls are just a few of the favorites that will be back for 2014, plus the band Nine Deeze Night will be there providing all your favorite 90’s music live from 12pm – 4pm “On the Green”.

Come fly in for the day and bring the family. Just leave the crabby family members home, we’ve got plenty.